Beauty and brawn: How one salon beat the recession

Beauty and brawn: How one salon beat the recession 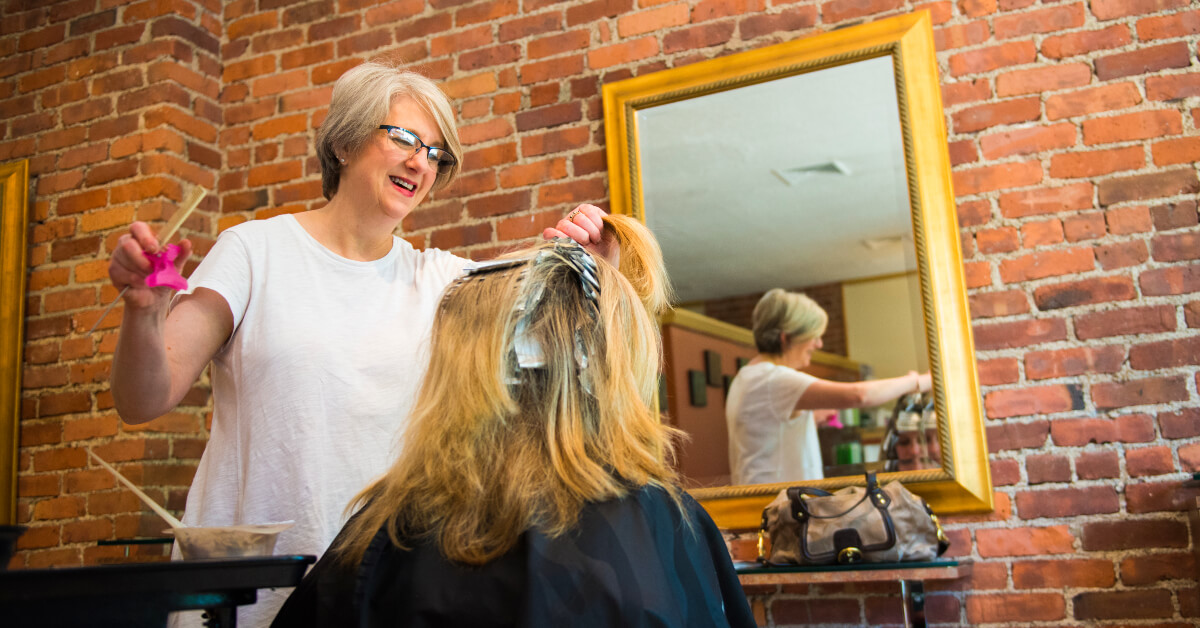 During the 2007-2009 U.S. economic recession, nonfarm payroll employment (the traditional measure of jobs) declined by 8.4 million, with small businesses being hit the hardest.

It’s impressive, then, to see businesses that not only survived, but have since thrived. Looking at Hair Colour Concepts today — a welcoming salon that opened shop in 2001 in Portsmouth, New Hampshire — you wouldn’t guess it had seen difficult times.

Owner and board certified hair colorist Laurie Ashe recalls the uncertainty of those days: “It was interesting to move into this big space in 2008,” she recalled. “We opened June 8th and my husband lost his job in August — just like lots of people did. We watched our neighbors lose their homes.”

Suddenly the sole breadwinner, Laurie decided to double-down on her work. It helped that she wasn’t alone — both employees as well as clients of the salon were experiencing the same uncertainty and trepidation Laurie was. “I came to work every day with women who were supporting their families all alone,” she said. “We had college students wondering, ‘How am I going to get a job in this economy?’ and customers who were the sole supports of their family.”

“So we tried to create a place in which all that got left at the door,” Laurie said. “It was just about making people feel beautiful and giving them an hour and a half that was just theirs. And so it actually was tough and wonderful at the same time.”

Unfortunately, despite all the sacrifices she made, credit card debt began piling up.

“I had to make the decisions I needed to make to survive, and so I created some credit card debt,” Laurie explained. However, as her need to consolidate increased, she found herself in an all-too-common situation for business owners.

“Banks are always happy to give you more debt, but they don’t want you to consolidate your debt and get rid of it.”

“I went to the banks and they were more than willing to lend me money because I have great credit…if I wanted to buy more stuff,” Laurie lamented. In other words, the banks only wanted to fund the more tangible aspects of running a business, like purchasing additional equipment — ignoring the fact that refinancing can help businesses save thousands per month, free up cash flow and, ultimately, help them grow.

But Laurie only wanted a loan for one purpose: “I wanted to consolidate the debt I had accumulated in just one easy payment.”

When she discovered Funding Circle, she was thrilled to learn we would be happy to help her consolidate her debt, and she was floored by how simple and straightforward the process was. “It was so easy: you filled out the form, they called you, they called [again] a couple of days later, and that was it — it was in the bank. I think I did a dance!”

Laurie advises other business owners do their research on financing options. She recommends examining the money coming in and going out of your business, as well as understanding what rates are based on. Since different loan products often have different rates, it can be difficult  to understand what’s fair. “On a mortgage — for, you know, $300,000 dollars for 30 years — it’s going to look very different.”

“It felt like Funding Circle set me up with my own angel investors. It was an easy and safe way to fund my business without having to go to a bank.”

Fortunately, she found Funding Circle’s rates to be competitive and fair. Plus, we have a simple one-time origination fee — no sneaky hidden fees that can quickly add up.

While she was otherwise generally happy with her credit cards, she admits the fees piled up quickly. “It’s $600 here, it’s $500 there,” she said. “It was just insane — I was just glad to have that gone.”

Laurie believes that control over your finances — especially the smaller fees — is key to being successful as a business owner.

“There is no fooling around in small business anymore. It’s a dime here, it’s a nickel there, and that can be the difference between you being here today and not being here tomorrow or being here a year from now.”

8 Ways To Improve Your Business Adaptability