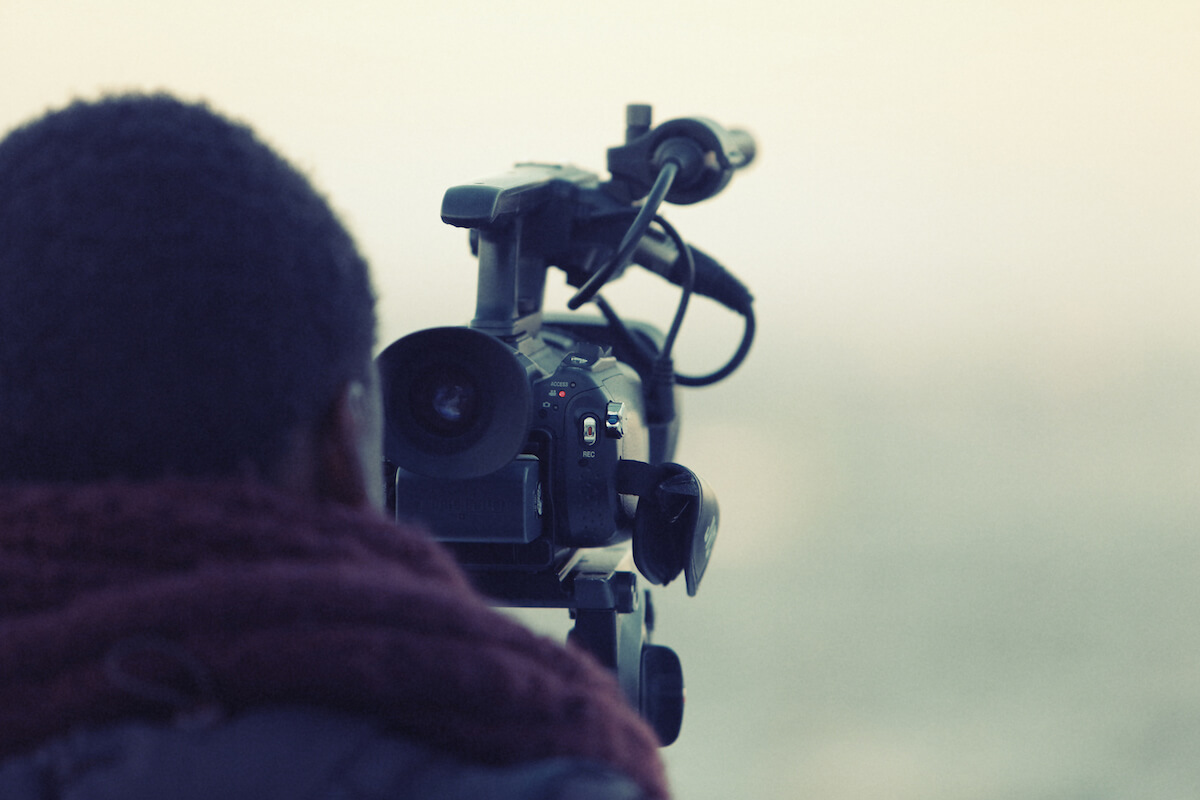 Video content is a bigger part of our lives than it has ever been. Nearly everyone who spends time online spends some of that time watching videos. Procrastinating, learning, LOL’ing. Video makes the world go round.

The stats around videos are staggering. You probably don’t need convincing, but in case you were wondering, approximately 5 billion views happen on Youtube every day. Snapchat gets twice that. Facebook is doing everything it can to compete with both of them, and Instagram is becoming as much a platform for videos as it ever was for photos.

Companies that use video marketing get more web traffic. Consumers are more likely to buy a product after watching a video about it.

Brands and small businesses are increasingly aware of the value of creating video content for their social and web audiences, but they still perceive the barrier to creating quality content to be too high to be realistically achievable.

There is a fear that expensive video cameras and complicated editing software are prerequisites for creating quality video. With the right creative talent, these tools can definitely help you create video that is impressively cinematic, but it isn’t strictly necessary.

The most important thing you can do in creating video content is simply to have a plan. That plan should consist of at least two important components:

Answering the first question is essential before you ever pick up a camera. Answering the second one will rescue you from the intimidation you’ll feel as you try to dream up a concept for a video that will go viral (sorry to be a buzzkill but it probably won’t). That’s crucial because many people obsess over getting lots of views, which depending upon your goal, can be the wrong metric to judge the success of an online video.

We’ll get back to those questions in a moment. First, let’s talk about the technical nitty gritty of making video content for your small business.

There’s different types of video for different purposes, platforms and audiences. Some types of videos do require a certain amount of production value, but as a brand or business owner who is dipping your toes into video content you only need a couple things:

Your iPhone or other smartphone is a powerful filmmaking tool. Recent iPhones shoot really impressive video. You wouldn’t want to shoot a feature film on it (though people have!), but it’s totally fine for most small businesses to use video shot on a phone.

The range of options here is too numerous to list, so we’ll limit it to 1. The Sony RX 100 ii is a comparative bargain with a fixed-lens that can achieve a variety of high quality looks. Newer Sony cameras feature cinematic looking ‘picture profiles’ that can make your footage look highly professional. You can use it with completely automatic settings or go fully manual. The newer versions of the camera offer slight improvements which would not be necessary for amateur videographers shooting footage intended for the web.

If you’re using an iPhone you can do something as simple as trimming your video in the native video browser on your phone. There are apps like Magisto that will make editing multi-shot sequences even easier.

You could also put your iPhone footage (or footage from any camera) on your computer and edit using something like Premiere Pro or Final Cut Pro. This is probably the surest pathway for producing high quality video content. Other options such as iMovie are good enough for 99% of use cases.

The following are additional steps you can take in order to make your videos more professional, but they are not strictly necessary and you can definitely make great video content without them.

An external sound recorder such as a Zoom H4n can be paired with any type of mic, such as a lavalier mic or a shotgun mic, to capture better sound from either setup. Just make sure to properly sync your sound and video by simply asking the person you’re shooting to clap once sound and video are recording (do this at the start of every shot). People will be more sympathetic to lower quality video as long as the sound is good. On the flipside, bad sound can make even good video unpleasant to sit through.

If you’re using your phone, something like a Joby Gorillapod would suffice in most cases. It’s cheap and multi-faceted and camera stability will make your videos seem much more professional.

If you’re using a ‘real’ camera such as the RX100 ii, it’s advisable to get a decent tripod. Something like the MeFOTO Backpacker offers portability and high build-quality on a budget. If you opt for one of the cheaper knock off brands, be sure to read a fair number of the reviews — especially those which focus on video as opposed to photos.

If you’re shooting on your phone, an app like Filmic Pro will give you more control over what you’re shooting and allow your already impressive phone videos to look even better.

Color correction software such as Lumetri Color (included with Adobe Premiere Pro CC) or DaVinci Resolve will allow you to take your footage to the next level. Simply adjusting the contrast, brightness and saturation of your video will go a long way to getting you there, but applying LUTs (look-up tables) can help you get exactly the look you want. It sounds harder than it really is.

Ok, with the technical stuff out of the way we can get back to those questions. In case you forgot:

What do you want your video content to tell people?

Is your video informational? Is it more story-based, such as a video showing your employees or customers doing something? Is it focused on selling products or communicating your brand values? What you want to tell people will dictate the approach you should take with your video. If your video is a demonstration of a product, it should be straightforward and efficient. If you’re telling a story, you still need to keep it tight and controlled, but there is some room for a more artistic approach. If you are telling a more documentary-oriented story, you may need to shoot some B-roll, which is extra footage to help set the scene — if you have a dog in your office, and that dog is visible in some of the shots, shoot a few closeups of the dog and cut to them. Documentaries utilize this technique all the time.

What do you want them to do after they see your video content?

Do you want them to share your video on social media? Before you start shooting, answer this question honestly: Would I share this? If you wouldn’t, don’t shoot it. Understand why people share things — primarily for social validation or because of some emotional appeal (funny, inspiring, etc).

Do you want them to buy something? Make sure you’re giving them all of the necessary information to both educate and motivate your intended action. Consider your CTA (call to action).

Once you’ve got your tools and answered those questions, you’re pretty much ready to start shooting video. Here are a few more rules that will help you maximize the quality of the work you can produce:

Keep it as simple as possible. Your video content doesn’t have to reinvent the wheel. The simpler your footage, the easier it will be to edit.

Have a reason for moving the camera. Camera movements should never be too quick unless you’re looking to achieve a specific effect. The camera should move as often as necessary, but never more than that. Think of your camera’s field of view as an extension of the viewer’s eyes. If the eyes wouldn’t do it while observing a scene, your camera usually shouldn’t either.

Don’t read the lines. Memorize or improvise. Nothing will make you sound so wooden and unpersuasive as the droning sound of you reciting pre-written copy. This is not to say that you should not have a script. By all means, script everything out, but set the script aside once you’ve internalized it and don’t refer to it while you’re shooting unless it’s absolutely necessary.

If you have something important to say, say it early. Most people do not watch more than the first few seconds of a video. Don’t be discouraged by this. This is more of an indicator of the fact that most videos are poorly produced and ponderous, than it is about an individual’s willingness to watch something that is interesting and relevant to them.

Have a shot list. This is exactly what it sounds like. It’s a storyboard in list form. If you know all the shots you need to get in advance, you won’t waste time and energy trying to ‘find the video’ while you’re shooting.

Use B-roll. To reiterate the point made about B-roll above, B-roll can go a long way to making your footage more watchable — and it will give you more options in editing.

Use music. There’s lots of royalty free music out there, some of it good, some of it bad. Don’t use popular ‘real’, copyrighted songs unless you’re ok with your video being taken down by the platform on which it is hosted. It happens. There’s something called the Digital Millennium Copyright Act, and rights holders use it to takedown videos and other media which use their intellectual property without permission.

Over time, in a non-rushed, exploratory way, learn how to use your camera.

Don’t be unintentionally funny. While you can almost never engineer virality, there is no surer way to get your video shared by the masses than to inadvertently make a fool of yourself. You don’t want those kinds of shares.

Copy stuff that you like. Scan Vimeo regularly for inspiration. In general, it’s easier to find high quality videos on Vimeo than on Youtube, but search both for content related to your subject matter, and use Vimeo in particular to see how people are working with the camera that you’re using as well as to find ideas for creative shots and framing.

Is this do-able? Keep this question in the back of your mind at all times. Can you realistically achieve what you are trying to achieve with your concept? Can you technically accomplish it in a way that will live up to your own definition of quality? Making good video content is not hard, but you need to understand and be able to work within your technical and creative limitations.

If you want to learn how to do something, search Youtube. Seriously, this one just goes for life in general, but if you have a question about lighting or editing or any other technique, searching Youtube will often give you a video explaining how to do what you’re trying to do.

Have fun. No seriously. Making videos is really fun. If you’re not having fun doing it, that lack of enthusiasm will get transmitted to your viewers consciously or unconsciously.

How small businesses prepare for the holidays: Field Day & Friends