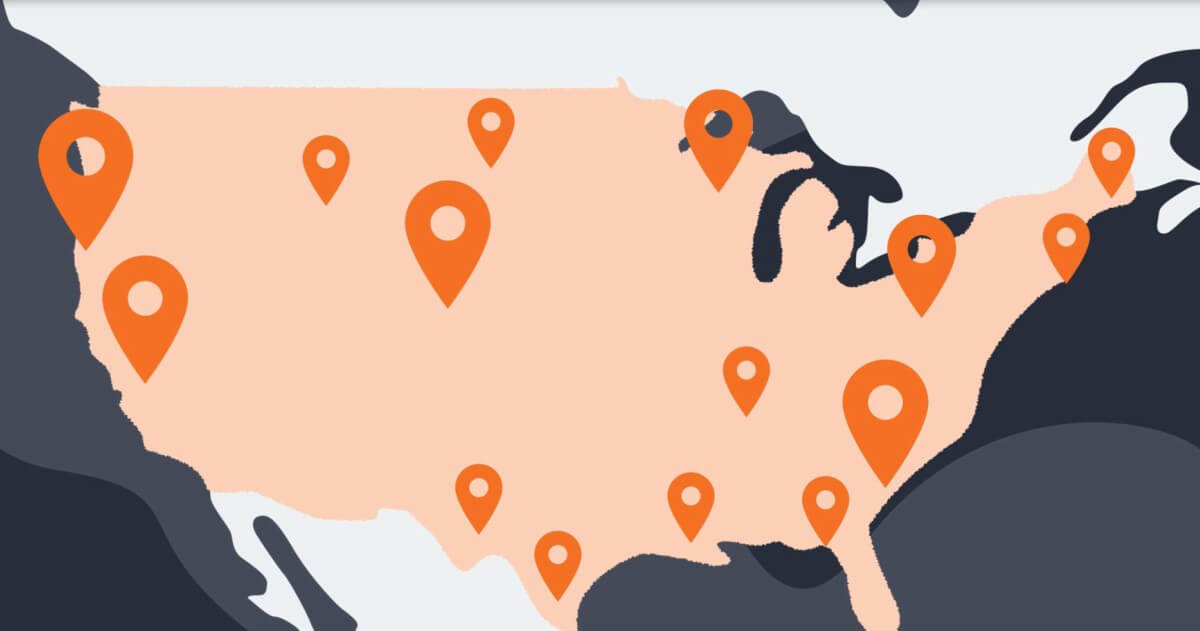 More consumers than ever are choosing to handle their shopping and other needs through screens rather than in person. Casually clicking in your PJs and lightning-fast shipping is appealing, but does that mean local small businesses — which are often without a robust online presence — are doomed?

Far from it. Millions of businesses continue to thrive nationwide — we talk to them every day here at Funding Circle! All it takes is a little strategy to stand out, along with the support of people in their communities.

Recently Funding Circle published the results of a survey on U.S. consumers’ support for small businesses. It reveals that even as consumers do more of their shopping online, 3 in 4 consumers (including Amazon Prime members) are still making the effort to shop at independent, local small businesses — and are willing to pay more to do so — rather than buying the same items on Amazon.

1. North Dakota came in first with an impressive 3.7 average visits to a small business in the past month over Amazon, per consumer. With one small business for every dozen people in the state, it’s no wonder the Peace Garden State loves to support local stores like Zandbroz Variety, a Sioux Falls fixture.

2. New Hampshire residents said they made 2.9 average visits to small businesses within the past month rather than shopping at Amazon, putting them second on our list. The state’s love for small business doesn’t stop there, with 52% of employed New Hampshirites working at a small business — a figure several points above the national average. Customers flock to unique shops like The Viking House in Concord, which specializes in Northern European imports.

3. Nevada came in third on our list with its residents choosing to make 2.6 average visits to small businesses over Amazon within the past month. The next time you’re in Las Vegas, skip the malls on the Strip and check out the Downtown Container Park, an open-air shopping center with small shops housed in repurposed shipping containers.

4 & 5 (tie). Hawaii residents reported 2.5 average visits to small businesses within the past month rather than buying the same items at Amazon, making them tied for fourth on our list. Hawaii also ranks among the highest in the nation for business owner diversity, with minority-owned businesses comprising an amazing 57% of the state’s 129,000 small businesses. Its six major islands are full of great small businesses like Kamaka Hawaii, a family-run company that has been making handcrafted ukuleles since 1916.

4 & 5 (tie). Montana tied for fourth place on the list, with its residents also reporting 2.5 average recent visits over Amazon. Whether they’re picking up a Montana Agate keepsake at Kehoe’s Agate Shop in Bigfork, or the perfect pair of boots at the Hippy Cowgirl in Billings, those in Big Sky Country like to think small when it comes to shopping.

6. Oklahoma came in sixth with its residents making a trip to a small business over Amazon 2.4 average times within the past month. Small companies make up an astounding 99.4% of the state’s businesses, and innovative places like Oklahoma City’s Holiday Pop-Up Shops make it easier than ever for Sooners to shop local.

7 & 8 (tie). New York residents chose a small business over Amazon 2.3 average times in the past month, putting them in a tie for seventh on our list. While Amazon’s move to the state may be making headlines, the state boasts 2.1 million small businesses who can also help with your shopping needs. After all, no website could ever make a bookworm happy like The Strand, which is known for its 18 miles of books.

7 & 8 (tie). Delaware residents also reported 2.3 average visits to small businesses in the past month rather than shopping at Amazon, tying for seventh. Both residents of the state and those from surrounding regions enjoy tax-free shopping throughout the First State, including at Snyder’s Candy, a Rehoboth Beach institution since 1940.

We at Funding Circle love seeing this support across the country. Helping small businesses is our only business. Through Funding Circle, businesses can apply for fast, affordable loans to hire employees, purchase inventory, expand their marketing, or grow in other ways. Terms range from six months to five years, with consistent monthly payments and no prepayment penalties. Click here to learn more.

Are You Leveraging Word-of-Mouth Effectively?