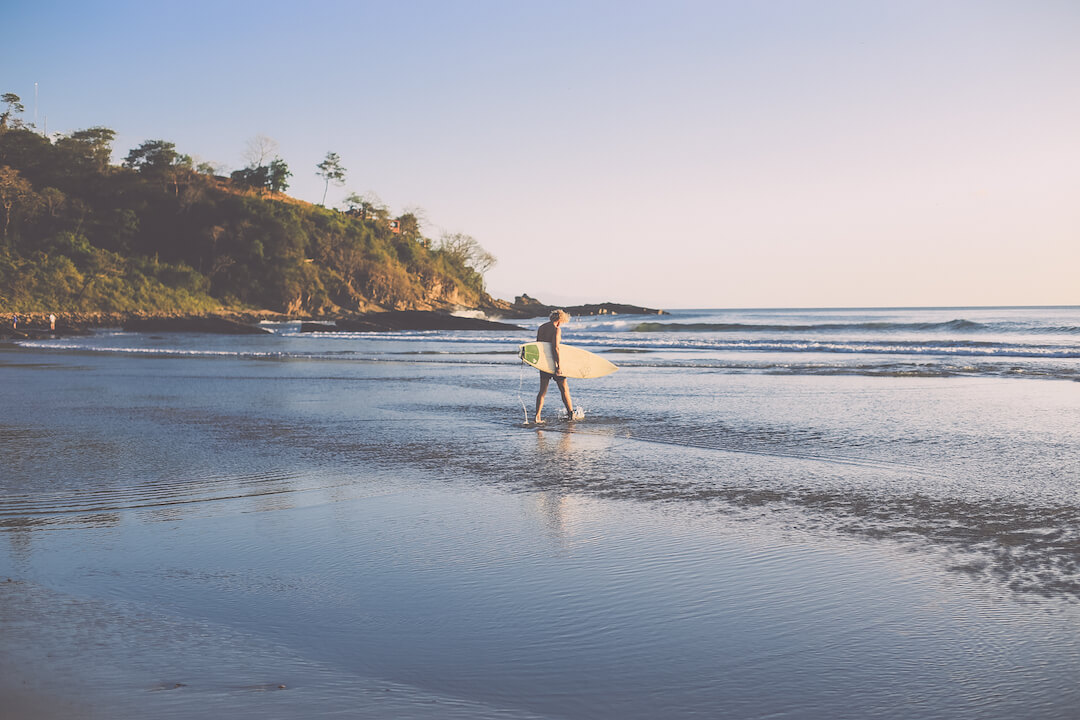 Matt Dickinson is the co-founder of the Maderas Village, a boutique hotel in Nicaragua.

Tucked away in the jungle, sitting along the Pacific Coast, you’ll find the Maderas Village, a sixteen-room boutique hotel catering to millennials seeking an off-the-beaten path experience some comforts of home.

Though the offshore winds that hit its coast 365 days out of the year make Maderas a surfer’s paradise, the hotel has attracted a clientele far beyond the Spicolis of the world. On an average morning, sitting at one of many community tables in their open-air lobby, it’s not unusual to run into product managers, fashion designers, photographers, and other creatives hailing from all over the world. And, with the recent build of an on-site music studio modeled after the legendary Compass Point in the Bahamas, Maderas is attracting an ever-increasing number of musicians looking to follow in the footsteps of U2, Grace Jones, and other icons who found inspiration in a far-away, tropical locale.

While it’s easier to fly direct to, say, Cancun and book it to Tulum, part of Maderas’ appeal is that it’s a journey only taken by those who want it badly enough. If you build it–and build it well–they will come. We talked to co-founder Matt Dickinson (Dickie, for short) about first customers, the economies of scale, and sharing some Nicaraguan rum with Winston Churchill.

What do you say when people ask, “So what do you do?”

I create experiences that help people remind themselves of who they are and allow them to hear that inner voice again.

Walk me through what an average day looks like for you?

I tend to have no traditionally average days, but my routine– I wake up somewhere between 8:30 a.m. and 9:00 a.m., try to do email from my bedroom for the first hour, and then go down to the lobby to check in with the admin side and see what the plan is for the day. I usually jump back up to my office around 11:00 a.m. and focus on Business Development for three or four hours.

I usually finish the day around 5:00 p.m with some final emails, and then I try to get out for a surf. The family dinner at the village is at 7:45 p.m., I’ll eat with the guests, have a couple of cocktails, and then see where the night goes.

When was the Maderas Village founded?

We have been operational now for 3 years, but we really founded the concept of Maderas Village 5 years ago.

What you were doing before you started the hotel?

I was in commercial real estate in Toronto, working 80-90 hours a week, grinding away. I got into real estate to get into hotel and restaurant development. Everybody I spoke to said that if you want to go into development, learn how to structure deals, what financing structures were like, how to talk to lenders, how to talk to appraisers, where value from real estate is actually created.

How does one learn to navigate the landscape of a new country from a business standpoint?

You just do. I mean, I think that this is consistent no matter what business you are starting anywhere in the entire world. Because, even if the landscape is familiar, and even if it’s in the town that you grew up in, a new business is going to present so many challenges and so many new lessons, that you never even thought about.

For us here, it was really just day by day. Just thinking through what needed to be done each day in order to continue growing. Every lesson that we have learned along the way we did with our chins up. You learn to understand that nothing will ever be done perfectly and you’re are going to make mistakes at every step along the way, but that’s also why we chose Nicaragua first. It’s a land that’s much more conducive to making mistakes and fucking up. We created this unbelievable platform to learn everything that we can about being in hotels, building and construction, developing a brand, marketing, food and beverage, etc. Really start to finish, just learning everything we can about the industry.

How did you raise the initial capital?

It was a combination of personal investment between all the founding partners and pre-selling each of the cottages, cabanas and casitas. We pre-sold each of the units in order to raise the construction financing to build everything else.

Who were your first customers?

It’s a funny question. So the first customers arrived on Christmas Day four years ago. It was wild– we had literally just finished construction. The carpenters had been sent home the night prior at 11:45 p.m., and we had guests arriving the next morning at 10:00 a.m. The majority of the actual guests were friends, or friends of friends, from New York and Toronto. Everybody wanted to see what we had been working on for the prior year and half in the jungle.

What’s the single hardest decision you’ve had to make as a business owner?

Firing people and letting people go, no question. There is nothing I hate more. It’s so soul wrenching. But ultimately, when you are the one making the decisions to grow the business, there’s a responsibility that comes along with that to your stakeholders and to your future employees. If somebody on the team isn’t participating in the way that they should be or isn’t living in the spirit of the culture, it can’t be afforded.

Was there ever a time that you thought the business wasn’t going to make it?

Yeah, absolutely. But it goes back to why we chose Nicaragua, and why this area was so appealing. Ultimately, the stakes just aren’t as high here. We’ve definitely been in situations that if we were in other locations we would have been pretty close to having to call it.

We went into construction initially with no one on the team having a construction background. The estimates that we received and trusted were completely off. We sold everything way under market value. There was this focus on getting stuff built and pushing forward and getting it done, but as we got into the last quarter and construction was supposed to be complete, we all looked at each other and went, “Oh, shit. We’re pretty under-capitalized here.”

What are the biggest challenges facing the business?

At this point for us, it’s scale. Right now, we have 16 rooms that we rent out, of which three are typically occupied by the owners of those units. So we are really working with 13 rooms to rent out and a food/beverage program which typically serves 30 to 35 people. In order to grow the brand that we want and in order to develop the business that we want, our services need to be significantly higher and more robust.

What we’re experiencing now is similar to the challenges that we were facing when we had four rooms and needed to build another 12. Right now we have 16 and we are looking to build another 20. We will always need to expand in order to justify the services that we offer.

How big is the current team? Would you say that you hire based on culture?

We have 28 Nicaraguan employees here and then we have another six residents that live here full time. We hire on skills, passion, and alignment with culture.

What is the most effective strategy for driving new business for a destination hotel?

We have a strong brand that we’ve developed through organic methods. Our focus here has never been on creating a resort atmosphere where you drink piña coladas all day. People who visit Maderas have honest experiences amongst great company and hopefully go home with a new perspective.

Word of mouth is extremely important for our business. It’s driven more sales than anything else. We’ve invested heavily in creating the experience that we think will drive word of mouth in our primary markets.

Why did you decide to open a music studio at the hotel? What artists have recorded at Maderas?

We talked about it from beginning, but it was something that, at the time, seemed so far out and ridiculous. We had a lot of musicians visiting as guests who told us, “Look, if you actually built a recording studio, we would happily come down and record an album. If we didn’t have to leave, we wouldn’t.” That provided that real impetus for us to make the decision.

In terms of the people that have been down, we’ve had The Knocks in a couple of times, as well as Ross and Nick from St. Lucia. We have Local Natives recording their next album here in the first week of December this year. Andrew from MGMT has been down. Tim Co from Ariel Pink. Phosphorescent did his last album down here. We’re continuing to encourage artists of any size to come down be inspired by the surroundings.

What brands and entrepreneurs do you look up to?

Definitely Virgin. I think Richard Branson is a genius. I love his attitude towards business, I like his positivity, his optimism, and the culture around making mistakes. I’m of the belief that mistakes are the only way to grow a business properly, and the only way that you truly develop strength.

Chris Blackwell from Island Records is another huge inspiration. He was one of the early visionaries to do a destination music studio. He’s also a big backgammon player, so I have to love that.

If you pick one guest from history to stay at Maderas, who would it be?

What’s one book every entrepreneur should read?

Atlas Shrugged and The Good Earth.

What’s the best piece of advice you can give someone considering starting their own business?

Don’t be discouraged by the inevitable failure, mistakes, criticism, and challenges that you’ll face along the way. Those will only make the next business easier to do and your reputation within the industry that much stronger. Ultimately, all that really matters is that you do it and move forward. If you get in over your head, just sit back and think about how to get out of it… and then do it.

How to Build a Community-Centered Business

Take a Trip with Wary Meyers