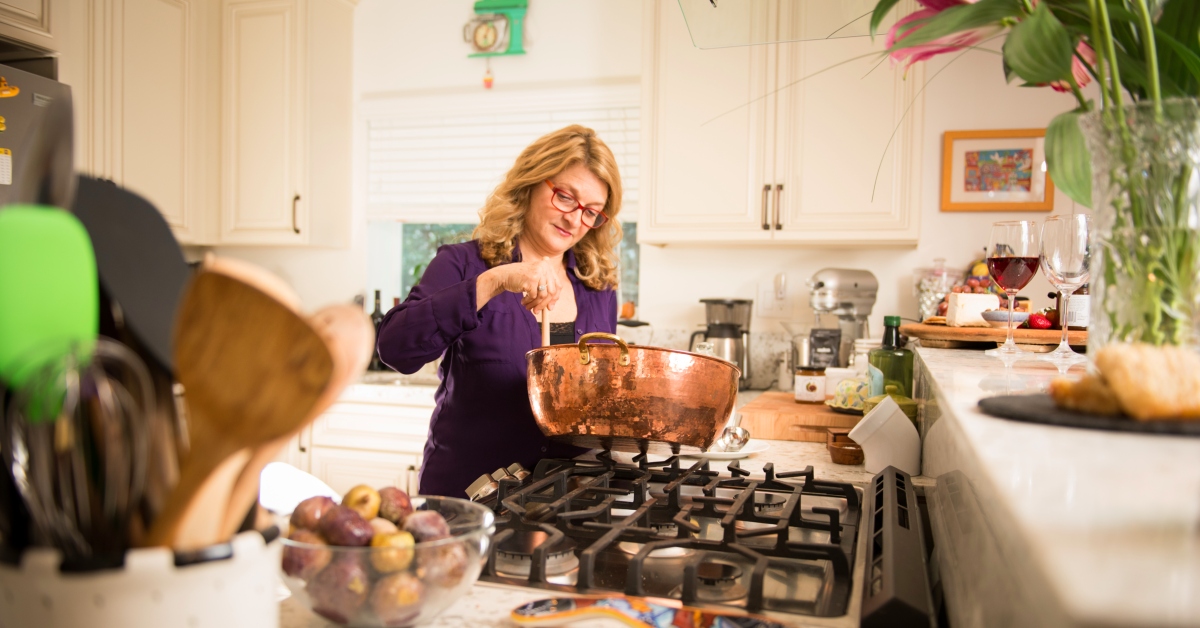 Rarely does growing your own business look like a scene from the movies. But for Jan Hogrewe, a major turning point for her gourmet fruit spreads company sounds straight out of a Hollywood script.

“I was introduced to a food industry professional when I was giving a jar of my fig jam to a friend,” she explains. “He tasted my jam and said, ‘wow, I really like this. It’s better than what’s on the market. Would you ever be interested in doing this for a living?’ and I said, ‘sure!’”

Overwhelmed but excited about this huge pivot in her life, she immediately “turned into a mad scientist, went into the produce department, and thought, ‘ok, what other flavors can I make?’”

After coming up with eight recipes inspired by the fruit trees she had in her backyard growing up, Just Jan’s officially took flight. With this cinematic start, it’s ironic to learn that Jan’s professional background is in film production — and Just Jan’s earliest beginnings were sheer happenstance.

“Just Jan’s started by accident for me. Making jam was just something I loved doing for family and friends. I had no idea this was going to be a business. Then I was asked the right question at the exact right moment.”

“There’s nothing like seeing my products on store shelves. It never gets old.”

Despite the accidental start, Just Jan’s rapidly began to grow and was soon picked up as a white label product in major retail chains like Sur La Table and Williams Sonoma. While this was a dream scenario, Jan eventually ran into a problem many other retailers face — having to pay for production and inventory in advance — and found herself strapped for cash.

Jan knew that if she wanted to add new flavors and ultimately expand her business, she’d need some help.

Fortunately, her movie-like luck continued. “I was having dinner at my cousin’s house, and her husband had just finalized a loan from Funding Circle. I was on the market looking, and he said, ‘you should check out Funding Circle.’ So I did.”

“I would recommend Funding Circle, hands down, every time.”

After reaching out to Funding Circle, Jan was pleased to find we weren’t like other lenders she had worked with in the past. “I have nothing but awesome things to say about Funding Circle. They were super quick, and my account manager was fantastic and great at following up.”

Now, thanks to Funding Circle, Just Jan’s is up to 13 flavors and is continuing to expand its name throughout the west coast. While before, “being able to continue to fund production and expand has probably been the biggest challenge,” Jan can breathe easier knowing Funding Circle is here to help businesses thrive.

“I’m really excited for the future of the company and its growth potential. I don’t see it slowing down anytime soon.”

Why it Takes Money to Save Money: A Case Study on Koshland Pharm

When marketing is worth paying for: A case study on Willie Powells