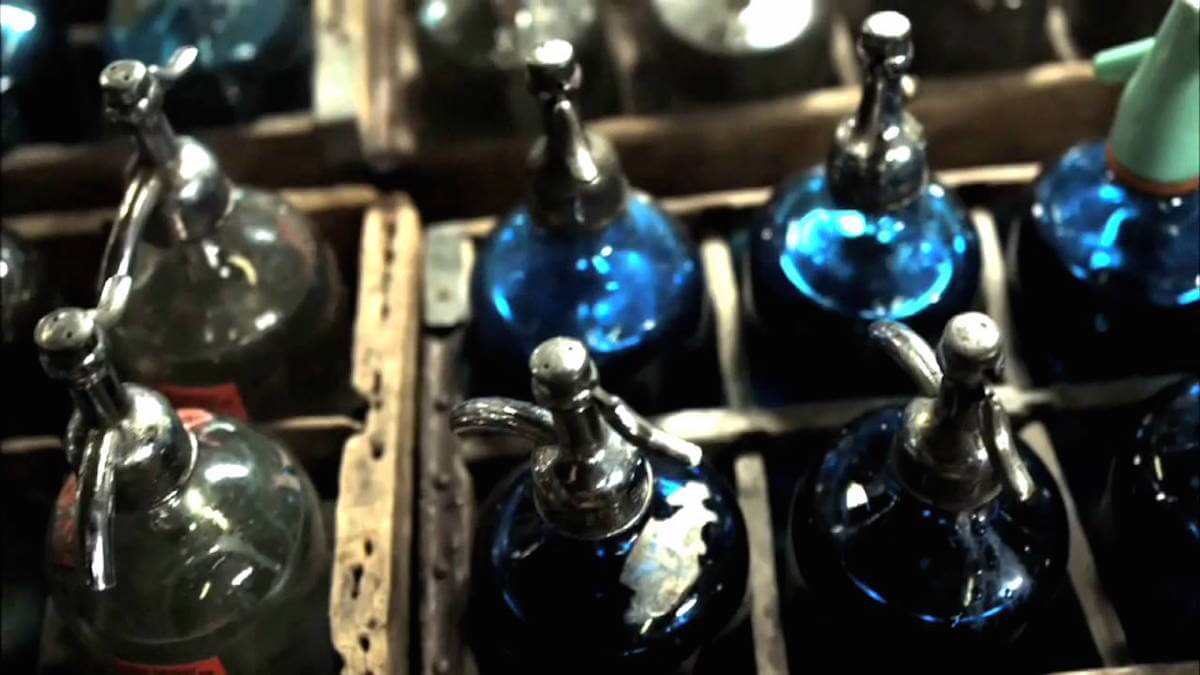 Alex Gomberg is the fourth generation to run Brooklyn Seltzer Works, a family-run operation delivering classic seltzer through the borough and beyond.

By the time you reach Brooklyn Seltzer Boys headquarters, a 13-minute walk through Canarsie off the last stop on the L train, you’ve seen what feels like nearly all of the borough from which it takes its name. Located in the same building since 1953, the company–originally known as Gomberg Seltzer Works–is a New York City stalwart, selling a product that’s as integral to New York City as, say, the subway or Type A personalities.

Much has changed since seltzer delivery man Mo Gomberg opened Gomberg Seltzer Works on an industrial corner of E 92nd St and Avenue D. A family business, today Mo’s great-grandson Alex Gomberg manages operations. His inheritance is a sea of ancient glass bottles with gleaming silver nozzles, stacked ten to a wooden case to the tune of 70 pounds a pop. The siphon machines that turn filtered New York City tap into bubbly gold are equally as old, made in 1910 and fixed up along the way. “No one’s making these things anymore,” Gomberg says.

At its peak, Gomberg Seltzer Works was one of dozens of filling stations around the city. There, hundreds of seltzer men came to top up their bottles and make their way along their respective routes, servicing a client base that reached into the thousands. Today, each of those figures has declined, with grab-and-go products like Schweppes and Canada Dry on the market. But what BSS’ competitors offer in convenience, they lack in taste. Turns out you can’t recreate that nose-tingling bite that glass-bottled New York City seltzer can provide. At least that’s the promise that BSB makes to a growing number of fans looking for the real mccoy.

In Part I of the Brooklyn Seltzer Boys’ story, we talked to Alex Gomberg about growing up with seltzer, working in a small family business, and the value of word of mouth marketing. In our next installment, we’ll talk to seltzerman Eli Miller, who, at 82 years old, has been servicing some of the same neighborhoods since Kennedy was President.

Growing up in the business, what are your memories of seltzer when you were a kid?

Growing up on the block, I was the only kid with seltzer in the household. We had these bottles at the dinner table every day. Even when I was growing up, it was an old-fashioned product already.

Did you always know you would enter the family business?

No, not really. I went to school like my other three siblings. But when I graduated, I felt why not now? Now’s as good a time as any to see if we could make this business bigger than it always has been. Right now, it’s me, my dad, and my uncle. Before me, they were the last bottlers in all of New York. They had to decide: Are we going to keep the seltzer business? Are we not going to keep it? And I’m happy that they did because I have job.

Do you think now there’s more interest in this kind of like heritage product?

I think seltzer in general is definitely growing again. People are more health conscious. Seltzer is obviously a lot healthier than the sodas that they have these days. So, there’s definitely an increase in seltzer sales.

For old-fashioned seltzer shops like Brooklyn Seltzer Works, people are becoming aware that we’re still here. When I came to the business three years ago, we rebranded from Gomberg Seltzer Works to a delivery company, Brooklyn Seltzer Boys. Before, they were just filling. Now, they’re filling but we’re also actually delivering to homes and restaurants and bars. We have a website and we’re using social media. These Seltzer men weren’t really doing that before.

But it’s still the same business. It’s the same exact bottles that were delivered years ago. The same way it’s done. It’s still in the wood cases, it’s still delivered by a seltzer man. It’s just that now customers are emailing me for orders. Now customers are finding us on Facebook or on our website

As a small business how do you market yourself?

People like you do it. Publications find us. The Times, The Post. These articles are not nothing.

How do you think an old product delivers modern-day value?

What do you think happens when these older seltzer men retire?

Unless these guys sell their businesses… and I don’t know who’s buying a seltzer route these days. I don’t think a seltzer route has been sold in god knows how many years. It doesn’t look like like these seltzer men are passing the business down to their children, for those who have children.

What’s the hardest part about being a small business owner?

Money’s always an issue. I get contacted all the time with “Put a billboard here.” And we can’t do that. So, we kind of rely on the media to find us through other media. I mean, we get in an article and somebody reads it and then somebody else does a piece. It’s a trickledown effect, and it all helps, it definitely helps.

How do you reach out to bars and restaurants to drum up new business?

We look online. I look and see new places and I make meetings. If they like it, they like it. If they don’t, they don’t. Storage is sometimes an issue, but most of the time people are pretty receptive to the bottles.

How do the bottles and syphon top impact the taste of your seltzer?

Most of the bottles were hand-blown in Czechoslovakia the early 1900’s. These are thick glass seltzer bottles that can hold the pressure. The pressure is sixty pounds [per square inch]–store bought seltzer is not even close to that. The syphon head has a valve inside. When you release the trigger, the valve opens, the seltzer’s forced out, and once you let go of the trigger, it seals back up. The pressure remains sixty pounds the entire time through. The first pour’s going to have the same pressure and bite and taste as the last pour. The plastic bottle, when you take off the cap, it escapes right away.

Where do you source the bottles now?

Old seltzer men. They go out of business and we buy them. People call us saying they have seltzer bottles in their basement and I’m running. They’re not made anymore. The old stuff is the good stuff.

And that’s what people want who want this product.

Yeah. They’re history. They all have the etchings of the old seltzer men with their names and logos engraved or sandblasted. They’re nostalgic. Can they be made new? Yes. At some point, when we run out of the working stock that we have here, we’re going to have to make new bottles somewhere, somehow.

Half a Century at the Drive-In