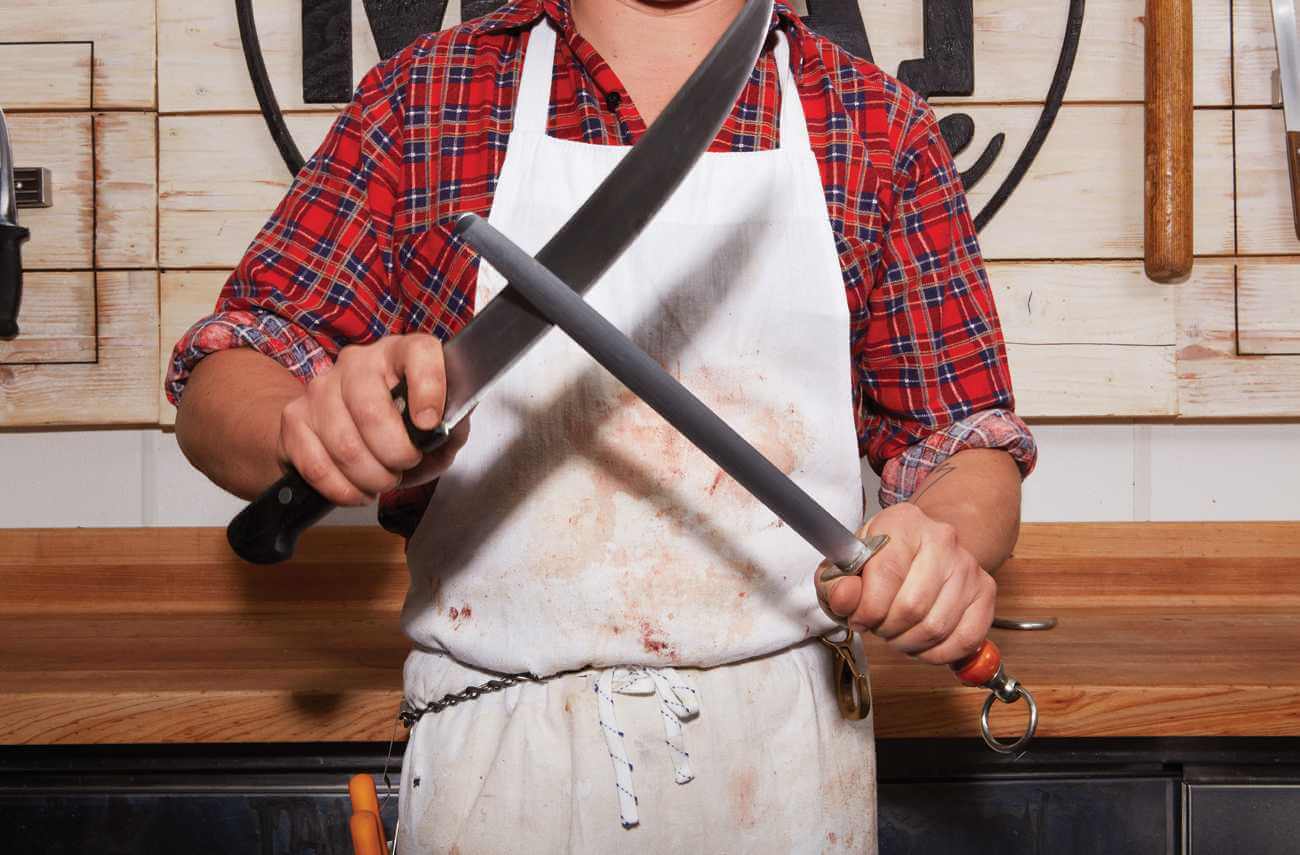 Pittsburgh born and Brooklyn based, Brent Young is the butcher and restauranteur behind Rippers, The Meat Hook, and Whitfield.

The success of the Meat Hook is one of those right place, right time stories, where the idea of a few converge with the changing tastes of many. After earning their stripes as butchers at Marlow & Daughters, Tom Mylan, Brent Young, and Ben Turley set out to create their own shop in 2009. Though their resources were limited, the concept was big: change the way people think about meat and, hopefully, change the way America is incentivized to make it.

Their Brooklyn audience was ready to learn. Those swept up in the farm-to-table movement weren’t just making sure their vegetables were non-GMO. They wanted to know where their meat came from, who the farmer was, what the animal ate. They wanted to participate in a system that favored small farmers, not multinational corporations. Yes, the days of meat of anonymous origin, served up on a styrofoam tray and wrapped in plastic, are on the wane–at least if Meat Hook has anything to do with it.

Spurred by great product and an ethical business model, the proven Meat Hook venture has opened up other opportunities for the team. First came the butchery offshoot, Meat Hook Sandwich Shop. Then Rippers, a Far Rockaway beach joint. In late 2015, Brent Young realized his dream of a nose-to-tail restaurant with Whitfield in the Ace Hotel, Pittsburgh. And, as of last week, the Meat Hook upgraded their headquarters with a fresh new space on Graham Avenue in Williamsburg. Here, we talk to Brent about the challenges of multi-tasking, the difficulties of traditional financing, and the importance of emotional company field trips.

What did your parents cook growing up?

That’s really funny. In one of the interviews I did recently, I had said how the food my mom made was very simple. She’s held that over my head as the most condescending thing I could have ever said. So this is my opportunity to redeem myself! I cooked American food with my parents growing up. We had a garden and cooked clean food. We always had dinner at the dinner table, which definitely gave me an appreciation for simple, clean ingredients.

What was the first whole animal that you butchered and how did it go?

The first whole animal that I butchered was a Mangalitsa pig in Richmond, Virginia. Myself and the other guys had no idea what we were doing. We turned a 20-minute project into a two-day project. All things considered, it went pretty well. But figuring out exactly what you want to do the very first time is a real trial in (a) honoring the animal and your approach to it and (b) terror that you’re going to screw it up.

How does one run a profitable butcher shop?

It’s all about diversification and value-added products. Also, that we sell things that are interesting and fun and delicious is the key. A butcher shop is a relationship built on trust. It’s important to know that what you’re purchasing is going to be delicious and that there’s transparency there–that what we say we’re selling you is what we’re actually selling you.

When you first started, how did you source the farmers? Was it word-of-mouth, online research?

A little of both. A lot of word-of-mouth. Very fortunately, we started around the time that sustainable agriculture was becoming a thing. Farmers started raising animals not even really knowing where they were going to sell them. We became a market for that. It’s been a very long process. It’s about starting a friendship and a business relationship with a lot of communication. We talk and text with these guys all the time. It’s constant communication.

How did you finance the Meat Hook initially?

We really just had one investor. I can barely call it a shoestring budget–like we found a shoestring in a gutter somewhere and decided to use that. We didn’t really have any resources other than a walk-in box, a saw, a grinder, and some deli cases. What we started was an experiment and an idea: if we sourced high-quality product and were unpretentious and transparent about what we were doing and had fun, that would translate to the customer. Slowly but surely, it ended up turning into a business.

As the company grew, did your approach to financing change?

It’s changed as our economic landscape has changed. When we opened the sandwich shop, we had a little bit of money but needed more money and equipment as we grew. We were able to finance some of it. We were able to approach the newer Business Development Corporations about getting a loan. We’re a bunch of young guys so we didn’t have a lot of collateral–approaching a bank isn’t super easy. While we have a solid, reputable business that does consistent business, it’s tough to get traditional forms of financing.

Sometimes you close the shop and take the staff to meet the farmers. Do you see an immediate change in the team when you return from the trips? Is it a successful bonding exercise?

It couldn’t be better. I cry every time. It’s really special. We rarely take the time to all spend time together. To do that on a farm and meet the people who are dedicating 24 hours a day, 365 days a year to raising these animals–it just gives you a much greater appreciation for it. It helps educate all of the butchers in the way they’re going to cut. You’re far less likely to throw something in the trash if you know it was intentionally raised for two-and-a-half years for you to be able to put a knife on it and sell it to a customer. Plus, it’s fun as hell. Everyone has a blast. But we try to do more than just visit farms and slaughterhouses because that’s a little intense.

Is turning a profit as a whole-animal butcher more difficult than, say, the commodity-based alternative?

I don’t know, honestly. I would imagine so, because if you go with boxed meat, you can get exactly what people want to buy. For us, a lot of what we do is marketing and salesmanship. Coming up with the right price-point for different things and stocking the case in different ways. It’s a lot more fun. But, profitability wise, I’m not sure what the alternative is like. This is the only butcher shop I’ve ever owned so it’s hard to say how other ones would actually work.

Where did the idea for Rippers and the sandwich shop come from?

Rippers really came out of an opportunity that was presented by Andrew Field from Rockaway Taco. The City Parks & Recreation Department approached him and said, “Hey, you’re doing this cool thing in Rockaway Beach. We’d really like to reopen these concession stands. We have no idea how to do that. Can you figure it out?” So Andrew reached out to a bunch of friends [to create their own stands]–fortunately, we were one of them. We got together with the guys from Roberta’s and thought it should be branded as something different. It wasn’t Meat Hook, it wasn’t Roberta’s. What do people want at Rockaway Beach? That was the conception of Rippers.

The Sandwich Shop really came out of necessity to process all of the stuff that we had come up with over the first three years. Like I said, we had a pretty podunk setup as far as a smoker and cooking equipment, or being able to make stock and roast meats. We were making our own pepperoni, our own mortadella, our own hams. But we were only able to make very, very small quantities of them and we were constantly running out. The idea was that if were able to take these less desirable cuts and turn them into desirable deli meats–that sounded like a lot of fun, and it was a little bit looser of a concept than doing a full-fledged restaurant. The Sandwich Shop turned into a commissary space, production area, catering outfit, and a place where people could get delicious sandwiches.

How do you manage your time between all the projects?

That is constantly a challenge. I’ve had to get a hell of a lot better at delegating. I don’t sleep that much. Just making sure that everything is coming in, running smoothly. It requires constant attention.

You’re opening up a restaurant at the new Ace Hotel in Pittsburgh, how did that relationship come about?

I had heard from Andrew Knowlton, the Restaurant Editor of Bon Appétit. He shops at the Meat Hook and I always wear a Pirates Hat. Four years ago, he asked if I had heard that Ace was looking at Pittsburg. So I tracked them down and basically hounded them for a number of years to figure out what that relationship looked like. I said to them, “I don’t know how this works, but whatever you need, I love Pittsburgh and I want to see awesome things happen here. Whatever I can do to help, just let me know.” I kind of turned into their Pittsburg liaison for a lot of creative outlets. Specifically my job ended up being with the F&B program. It was a really long conversation that one day got serious.

How does it feel to return to your home state with Whitfield?

We’ve talked about doing different restaurants in New York, but this opportunity came across our plates and couldn’t be better. Ace Hotel is a fantastic partner. We have a great support system. That experience with them, more than anything else, has taught me a lot about leadership structure that I wasn’t necessarily privy to before. Like, how do they function operating in six different time zones, let alone twelve different properties? We’re nowhere near that, of course, but it’s about taking what they’re doing and applying it to what we’re doing–making sure we still have an attention to detail and everyone’s voice is being heard.

What makes hospitality so special to you?

All of it. It’s natural and fun for me. I don’t come from a family of butchers, but once I started working as one, I thought it was the perfect platform for working with food. You get to work closely with farmers, you get to understand the agricultural impact on your business, but also what it means politically in the US–that’s an active engagement. You also get to sell something to the customer. I come from a family of salesmen so that’s a really fun exchange for me. And you get to talk to people about it. They get excited about it. You get to see their reaction and continue the conversation. It’s really rewarding.

One book every entrepreneur should read?

The Power Broker. Because (a) Robert Moses is a maniac and (b) if you own a business you’re probably extremely tired and this will help you fall asleep.

Keep it simple. Grill a steak.

The Roast Beef is consistently the most satisfying, delicious lunch you can get in the neighborhood.

First thing you’ll eat at Ripper’s once the weather gets warm:

Burger and a beer!

Most underrated cut of meat:

Beef shank–king of the crock-pot!

Knife every cook should own:

Can’t beat the 8″ chef. Most versatile knife around.

Gotta keep the shop upbeat and moving fast, so if we aren’t listening to T Swift or Carly Rae, we’re likely listening to Van Halen or our favorite Richmond band, Sports Bar.

Your 5 favorite small business in Brooklyn: