A Bit of Australian Hospitality

A Bit of Australian Hospitality 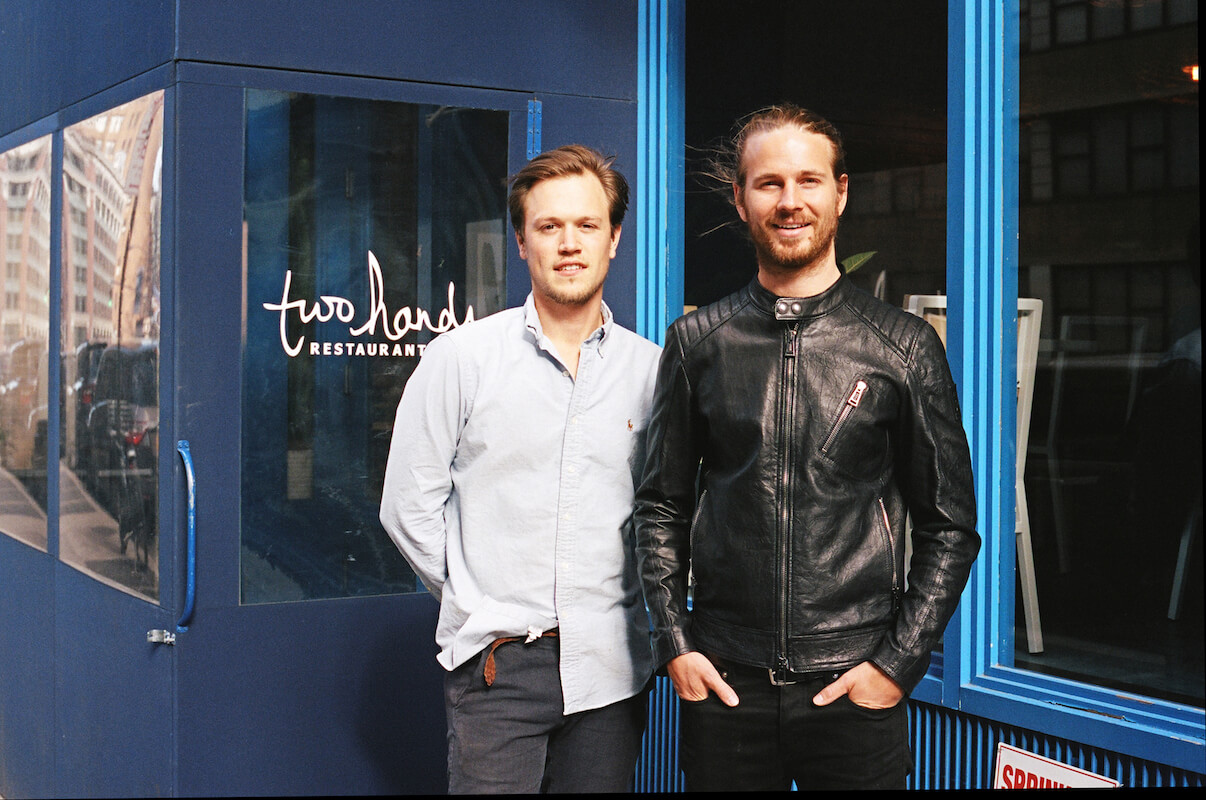 The foundation of a good cafe is of course, the coffee. However, what sets Two Hands apart extends far beyond the quality of their mud (or their Instagram-famous avocado toast, for that matter); it has much more to do with Henry Roberts and Giles Russell, the Australian restaurateurs behinds the operation, and their homemade recipe for success: hospitality, optimism, and a dash of confidence.

When the duo, nearly 10,000 miles from home, opened Two Hands Cafe in 2014, they didn’t have the support of deep-pocketed patrons. What they did have was an intense passion for Aussie coffee culture, a desire to bring a more community-driven cafe to New York City, and a bit of personal savings to kickstart their dreams.

Once they found a landlord who was willing to give them a shot, Giles and Henry took to Instagram—at a time that predated the word influencer being a career—to get customers through the door. Between the Australian-inspired design (“sunny and inviting”) and vibrantly-colored eats (“bright, simple, and crave-worthy“), it wasn’t long before Two Hands developed a committed clientele who voraciously spread the word offline as well as through countless aesthetically-pleasing images on social media.

Here, we talk to Henry and Giles about the process of getting started, the future vision for Two Hands, and how they deal with the problems—some good and some bad—of running a business.

When was the first time each of you had coffee? Describe the experience for me.

Giles: The first time I had coffee was in high school. I woke up in the morning and I went down to a place called Queen Street in Sydney, which is this beautiful tree-lined street with a lot of cafes. I met my friend and he brought me to his local cafe. It was essentially the start of what would become a long-term ritual of us going to that same cafe, twice a week. That taught me about what coffee was all about: meeting up with friends, hanging out together.

Henry: I used to see the older kids carrying a coffee cup on the way to school and I thought that was really cool. The first time I can remember having a proper coffee from a cafe was one morning when I went and got a cappuccino, even though I didn’t know what I was doing or what I was ordering. It was the start of a morning ritual on my way to school.

Giles: From what we’ve experienced in America, it seems that some people treat coffee as just something you have to do. Whereas, in Australia, people really, really enjoy the taste of coffee. Australian coffee culture came from the Italian coffee culture, which was to treat coffee as an art and lifestyle. Australia is also lucky to have very high quality dairy. People are manic about coffee in Australia, in an artisanal sense.

Are there Starbucks in Australia?

Giles: There are, but some of them shut down and left. They didn’t realize when they came in that Australians aren’t really into whipped cream and frozen mochaccinos. Australians are also hyper-local and loyal.

What’s the origin story of Two Hands? What led to its founding?

Henry: Giles and I moved to New York about six months apart. We got together and decided that we wanted to open a quality cafe, something that was more local and friendly, a community-driven sort of place where people could drink coffee and eat good food. It wasn’t because [quality coffee shops] weren’t already here; it was more about us loving New York. It was the land of opportunity and we decided to do it. It took about two years to plan and organize what we wanted to do, which changed over that period, but we landed on our first location on Mott Street. It was basically the closest neighborhood to where we lived and worked. We knew that part of New York the best, and it was within our budget.

And you two had experience in the business too?

Henry: Yea, Giles and I worked in hospitality in a bunch of different places throughout Sydney, a bunch of cafes and bars.

What was the biggest challenge you faced when you were first starting up?

Giles: The biggest challenge before opening up was finding the location, especially one where the landlord would give a space like that to new cafe owners. We had never owned a cafe before, nor did we have a million dollars or a credit rating. We just went on personal savings and a huge drive to open a cafe. Both small and big landlords here want to see a lot of money behind you, a really good credit rating, and see that you’ve done it before, because you have to sign a 10-year lease. It’s a risk for them. We were really lucky to find a landlord who was willing to give us a shot.

Why did you expand from a cafe to a full restaurant?

Giles: Most cafes in Australia open at 7 a.m. and close at 3 p.m. It’s really hard to find a cafe open past 3 in Sydney. We were looking for that lifestyle: get up in the morning, make coffee, and then finish at a reasonable time. We wanted to be able to rest at night. However, in the trial period of the first location, we realized we wanted to add beer, wine and spirits, and offer a dinner menu. We wanted to reflect the kind of food that was being offered in cafes in Australia right now. Also, in America, cafes are often only coffee shops, while in Australia, cafes almost always serve food.

What was the biggest challenge in opening the second location?

Henry: There’s the initial grueling phase of going through construction and going over budget and dealing with delays. But then you open, and you realize that you’re open 7 days a week for breakfast, lunch and dinner, and that you need to deal with issues at all times of the day. Every day there is a new challenge. Staffing is always a hard factor to get right, and it’s always ongoing since the hospitality industry has a lot of young people coming in and out.

How would you describe your clientele?

Henry: They’re definitely similar, and it resonates across the two stores as a brand as well. There’s a lot of women, 18-35 year old women, and a lot of people looking for clean, healthy food. They’re not looking for something that’s fried in a pan, or a one-hit wonder juice bar. They’re looking for a lifestyle eatery where you can come for breakfast, lunch or dinner. It’s a place for well-rounded meals. The people that come are a little bit more in-the-know. We get a lot of moms and their kids in Tribeca.

What sort of marketing program does Two Hands have?

Giles: In the first year, we didn’t pay for any marketing. We were on Instagram and Facebook and just relied on social media to spread the word. Through word-of-mouth people started coming in. We didn’t have the money to hire a PR firm or advertising agency. We just hoped that from day one people would come in and really enjoy their experience and tell their friends about it. Instagram played a particularly big role, since our food is prepared so beautifully and is very colorful. The design of the spaces are also very Australian, in the sense that they’re very sunny and inviting.

Giles: It changes all the time. It’s probably split between local, and the international. We’re so lucky to have people approach us from all corners of the world suggesting and asking if we want to expand in lots of different ways. We’ve had offers from London, Dubai, Abu Dhabi and Australia, as well as from Miami, Boston and L.A. It’s been very flattering. But that would require a lot of time, money and manpower from Henry and I. It would also come with a lot of the stresses of having a large company. That might be where Two Hands ends up one day, but on the flipside, running only two restaurants ourselves means we can both be here—the two locations are only six blocks away from each other. We can be spending time with the staff and customers. This is why we started a cafe in the first place. We didn’t start it to make a million dollars; we started it so we could hang out with cool people and eat yummy food and drink great coffee.

Henry: Building a good team of staff that are happy. It’s crazy, but with two small locations, we have a rotation of over 70 staff members, if not more. You gotta make sure everyone’s okay and happy and being heard, that they’re coming into work and enjoying it. That’s a lot of responsibility, especially without an HR team. We get a lot of new staff in every week too. That’s an ongoing challenge that we’ll never get to the endpoint of. Managing people is really important and a great skill to have.

What’s one book every entrepreneur should read?

Giles: The book that I suggest every entrepreneur in the food industry to read is Daniel Meyer’s Setting the Table. It really reflects the style of hospitality that we want to provide.

What are your five favorite independent businesses?

Why is it important to support independent business?

Henry: I’ve noticed this back home and with a lot of the generations coming up. When I was in school, it was always like, you’re gonna work for a big bank or firm or something, a 9-5. There’s been a huge change for young people who are going out there and starting their own businesses and risking the civility of a 9-5, taking their dreams and trying to make them come true. What social media has become today, I think it’s really given people a huge platform to make their dreams come true. It’s connecting the world, so everyone has an opportunity to succeed, and everyone’s learning from everyone else, and also hopefully helping each other. By supporting those businesses, you’re encouraging that kind of movement in society, which I think is positive work.